Fabrics are fully CE marked in addition to the garments themselves in order to be compliant with European Regulations. Only fabrics from reputable European producers are used in HAZTEC FR garments to ensure consistency and assured protection.

Many of the HAZTEC FR AS Workwear garments are produced using the Protal FR fibre – a Modified Acrylic, more commonly known as Modacrylic.

There are only 2 main producers of the Modacrylic fibre in the world, and Protal (also known as Protex in some parts of the world) is the blend developed for the European market, in conjunction with Waxman Fibres, UK.

Protal is a fibre that is then used to spin into a Yarn that is in turn used to create a fabric. The Protal Partnership offers an entirely traceable supply chain from fibre to yarn to fabric to the completed garment. For any organization concerned for the safety of their staff, specifying fabrics that contain genuine Protal fibres and are recognized under the Protal Partnership should be high priority.

Modacrylic PLUS is the name we use for the blends of fabrics used in HAZTEC garments. These blends will vary according to the properties that the fabric needs to be CE or UKCA marked to. For example, a garment that is CE/UKCA marked for Hi-Visibility Orange purposes would contain a content of Polyester in order to achieve the depth of colour required for the background fabric to have reflective properties. 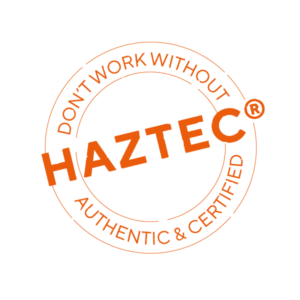